Dive into this case study of how a micro-brewery turned the launch of a new beer into a multi-state event. 10 Barrel Brewing took thinking outside the box to a new level when they brought the Pray for Snow winter ale to winter sports lovers across the West Coast.

See how they used white artificial turf as a low-cost fake snow addition, and turned that into plenty of pictures of people enjoying their new beer, with sleds, skis, and snowboards. That’s how you turn an ad into cherished memories associated with your company.

Bringing People Together, One Experience at a Time

We’ve become so accustomed to being advertised to, the billboards, popups, commercials, and emails all too easily become white noise to ignore.

Experiential marketing is becoming something that more companies choose to invest their marketing dollars in. The age of social proof making or breaking a sale lends itself to bringing the focus back to basic human connection.

So when you’re trying to plan an event that will not only get people’s attention, but also get them genuinely excited about the product or service you’re promoting, it’s important to make it not feel like a commercial in 3D.

Planning a Winter Event: Tap Into the Snow Magic

There’s an undeniable magic that comes with playing in the snow.

When the sleds come out, even the most “grown up” person in the crowd can get excited. The only problem is, if you’re an event planner trying to take advantage of the snow excitement, the weather can be unpredictable.

Making sure the location you chose has enough snow on the date you need can make or break your event.

You honestly might have better luck herding a group of cats into a room. Seriously.

Anyone who grew up around snow knows that a few measly inches won’t last long on a sledding hill, and it’s definitely not enough to ski on, unless it’s already been snowing and there’s a buildup on the mountain.

Pray for Snow with 10 Barrel Brewing

10 Barrel Brewing launched a winter ale called Pray for Snow, and they found a way to make a portable, weather-proof ski slope. Based in Bend, Oregon, 10 Barrel knows a thing or two about how excited mountain-dwellers get about the start of ski season.

What better way to get people excited about the idea of praying for snow than bringing the snow to them, with a little free beer on the side?

They transformed a giant truck to feature a 70-foot ski slope. Skiers, snowboarders, and beer lovers alike flocked to their local pubs to take a turn shredding the white turf fake snow “pow.”

For the uninitiated, fresh powder (aka pow) is like the finest delicacy to skiers and snowboarders. It’s fluffy and soft, and it sparkles in the sun, looking magnificent blowing off the sides of your skis. 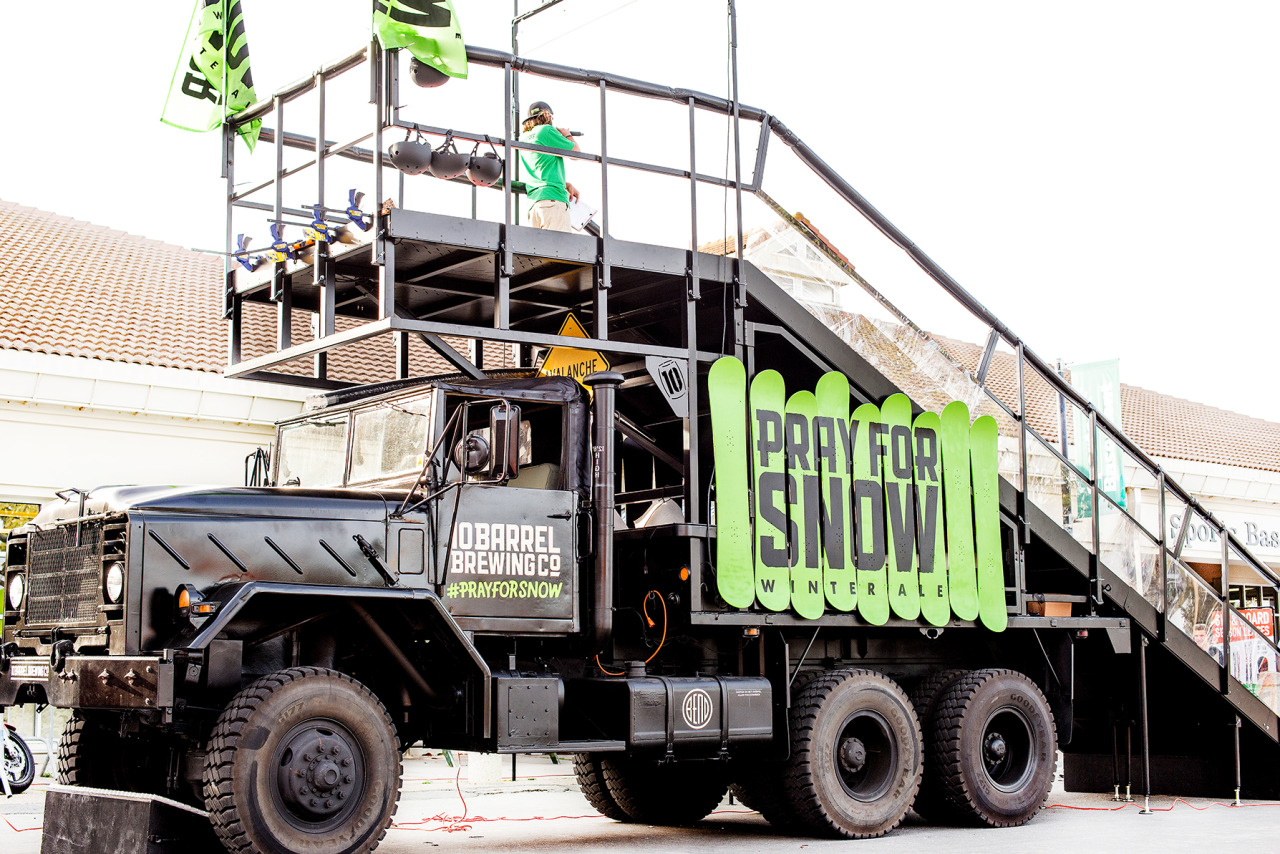 The winter ale this whole event revolved around was launched in 2015. Since then, the Pray for Snow winter ale comes back once a year, and with it, the fake snow festivities. The Pray for Snow truck makes appearances at the local 10 Barrel Brewing pubs in Oregon for the yearly release parties.

It’s even become the main attraction of their hometown festival – Bend, Oregon throws what’s called the Bend Winter Fest once a year. Locals get to ski, sled, or snowboard down the portable slope, and celebrate the change of season.

The Pray for Snow truck has gone on quite a few trips throughout the years, making stops in Northern and Southern California, as well as Seattle, so almost every West Coast ski bum got a chance to try this fake snow.

Brew beer. Drink beer. Have fun while doing it. (A clear brand will help you)

All of the things listed above are social activities that are well-suited to groups.

Brewing beer is an art, and a craftsman’s passion. It also happens to really easily appeal to the bearded microbrew-loving hipster mentality.

Drinking beer is a social thing. People love playing drinking games with beer; they love learning about beer and trying new kinds. They love being surrounded by their good friends while doing it.

The emphasis on having fun implies a relaxed atmosphere, and an informal attitude and language. This can apply to all kinds of situations not directly related to beer.

When it came time to plan the initial launch of the Pray for Snow winter ale, 10 Barrel Brewing looked to an agency in Portland for help. Some of the ideas considered took the concept of “praying for snow” too literally. It started becoming about gimmicky images of hands in a prayer position, and the religious overtone was too serious for a spontaneous fun-loving company like 10 Barrel.

The people that work every day in the 10 Barrel Brewing pubs, brewery facilities, and headquarters love to spend time outside. Winter sports hold a particular place in their hearts, and this is the true indicator of the Pray for Snow campaign’s success.

Authenticity is more important than ever. People have become street-wise to the ways of advertising, and if a company they support does something that doesn’t feel true to the brand they’ve come to expect, they will know.

In order to get your customers excited about something, it has to resonate with them. When it resonates equally with the people behind your company, there’s a foundation built on that symmetry. That foundation is what enables you to create events with the intention of marketing a product through an experience – and actually get customer engagement.

When 10 Barrel Brewing began planning their epic faux slope on wheels they had a few needs in mind. The surface needed to be smooth enough that it would simulate freshly packed powder, durable enough to withstand heavy usage, and it needed to be affordable.

They knew heading into this that the biggest challenge of using a portable ski slope would be getting the snow they needed. For the foundation of the skiing surface, 10 Barrel used something called M Snow. Basically, they’re square tiles of a synthetic material that serves as a frame, and that can hold either snow or ice shavings. 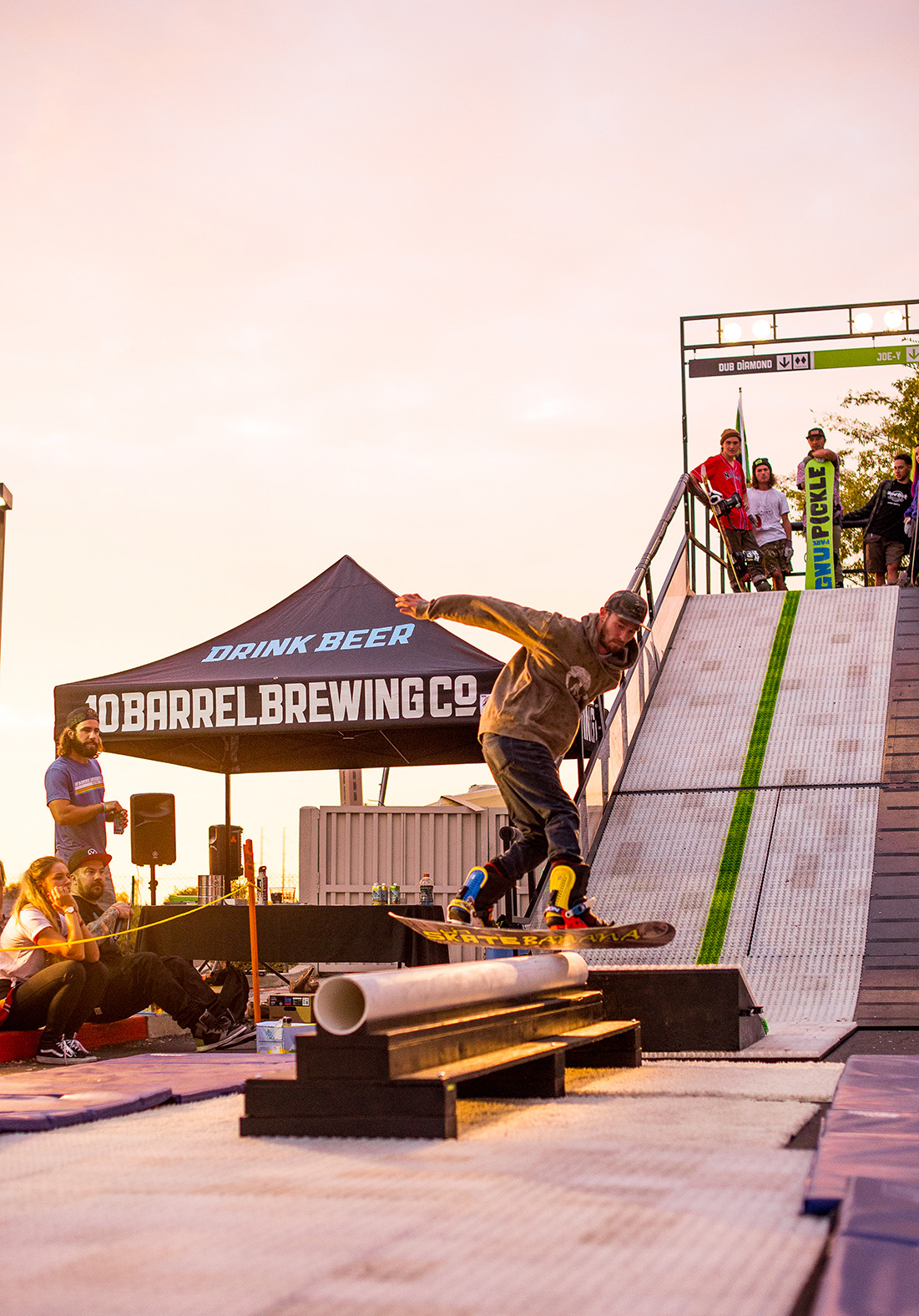 Because their slope was mostly covered in synthetic materials, the truck was mobile. But the fake snow solution they found needed to be maintained with fresh snow or ice shavings.

This meant 10 Barrel had to be selective of where they brought the truck. They worked with ice rinks or nearby ski hills to get the ice shavings or snow that they needed.

It became essential for the route to have an ice rink or ski hill nearby. Sometimes, they were hours away from where the 10 Barrel truck made its stop, so the team used insulated U-Haul trucks to transport ice shavings to the location.

But sometimes it was too early in the year or day, and the ice rinks weren’t open yet.

After some research, they contacted Rug Street, and our 6-foot wide white turf was the kind of backup they were looking for. The low profile top of the turf made an extra slick sledding surface for the end of the slope when the momentum starts to slow.

Because Rug Street has the capability to custom cut event turf anywhere from runner sized carpets to full rolls, we were able to create just the right fit for 10 Barrel’s mountainous needs. This portable ski slope was going to be putting some extra strain on the white turf, so they made sure to fasten it to the truck with glue, tacks, and whatever was needed.

While it’s not actual snow, it made a perfect alternative while everyone waited for the real stuff to appear. Artificial turf isn’t just ground cover anymore!

Getting the word out about events isn’t easy. Just because you say something once doesn’t mean everyone will see it, or that they will all come.

Some companies use email to help with this, but for 10 Barrel Brewing, social media is their most effective method. Being scattered across multiple locations on the West Coast, it’s easier for them to segment and get things to the right audience via social media. Their small team doesn’t have the capacity to manage email marketing on top of everything else.
Different strategies work for different kinds of companies, and there’s something to be said for picking something to focus on, and doing it well. 10 Barrel primarily uses Twitter, Instagram, and Facebook. This has proved very effective for them, especially with Facebook.
Each location can have its own page, with calendar events, and content specific to the team at that pub. The versatility of social media is well-suited to event promotion. Separate from the brewery’s website, 10 Barrel created a Tumblr page filled with pictures of people having fun in the “snow,” and enjoying the Pray for Snow winter ale. 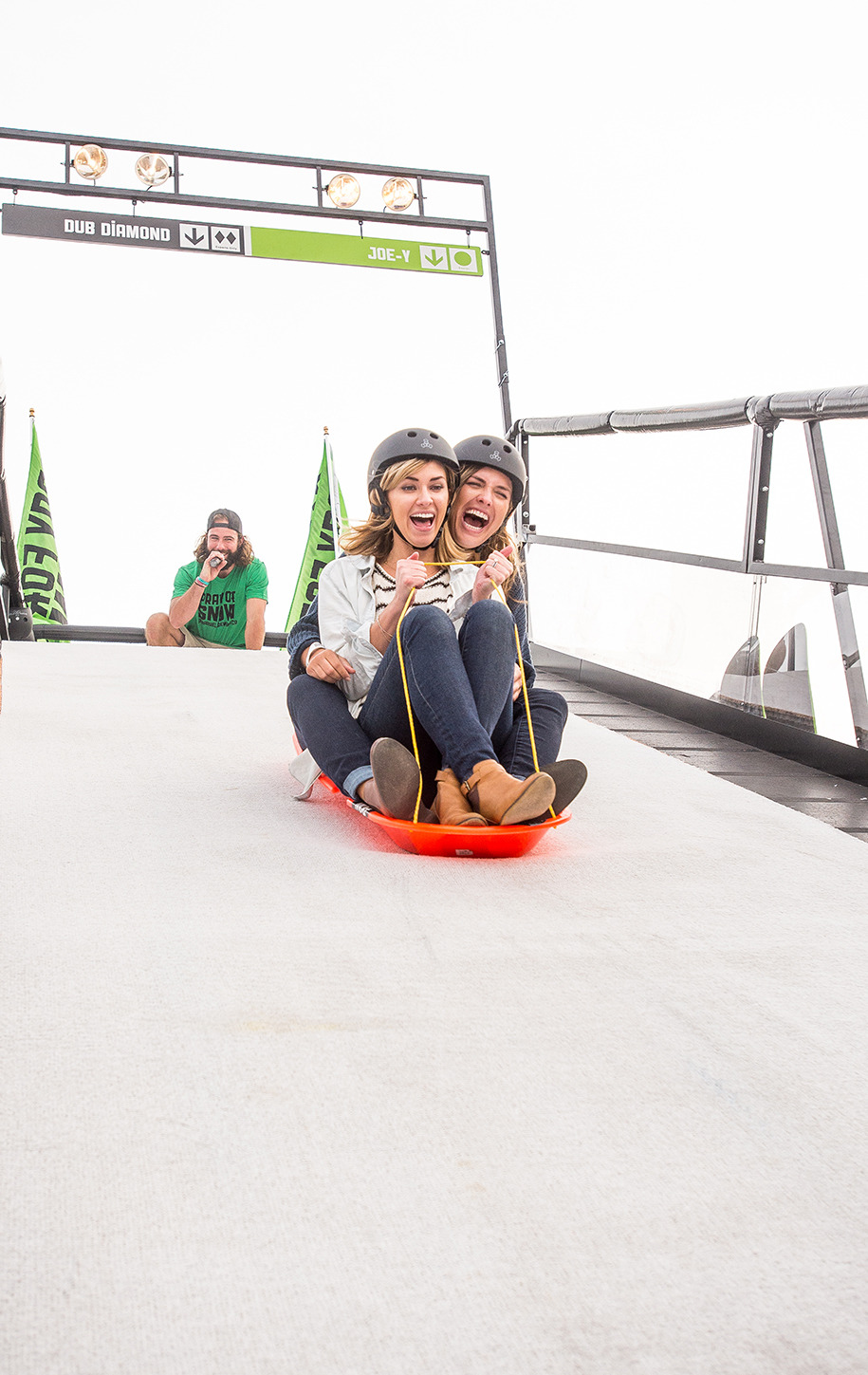 If anyone wanted to follow the Pray for Snow ski-slope-on-wheels across the West Coast, this Tumblr page was the place to go. For those who attended the event, this made it super easy to go and find pictures of themselves.

When it comes to planning an event, there are countless options that don’t fall into the standard “party” category. The trick is to find something that’s true to the brand you’re representing.

Experiential marketing is about celebrating the people who use your product on a regular basis. They have a certain perspective on the world, and your product does something to help them be the “better version of themselves.”

Whether it’s the obvious choices like makeup and clothing, or a shaving accessory subscription. A rug to make the office look well-decorated, or a blender to make their special green juice. These physical objects are not the true motivating factor behind the purchase, or even the customer’s loyalty to your brand.

The customer’s perception that these objects will help them appear more well-groomed, have more confidence, or feel like they have more energy is why they buy them. And it’s the personal touch service the people behind the company provide that builds loyalty.

When you facilitate an experience and people connect with each other in genuine ways, it doesn’t feel like an ad.

When your customers and prospects associate you with helping them make a good memory, they trust you more.

So go out there, and help your customers have an experience to remember.

Author’s note: Special thanks to Andy at 10 Barrel for sharing about the journey of the Pray for Snow truck, and the awesome photos!